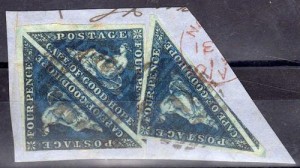 The Cape Triangular stamp, the first postage stamps in South Africa, was commissioned in 1853. On this stamp, the figure of Hope appears, to make it appear different from the British stamps. Sir George Cathcart insisted that the South African stamps look different that those of Europe and Britain’s, because the two regions contrasted so greatly in terms of culture.

The first definitive stamp series of the Republic of South Africa was issued on May 31st 1961. The stamp had an image of the gable of a historic Cape Dutch dwelling, Groot Constantia. Once the territories of South Africa declared independence in the late 1970’s, many of the stamps issued by postal authorities in South Africa were not recognized by other postal authorities but were accepted on international mail. This was because many countries did not recognize the independent territories of Transkei, Bophuthatswana, Venda and Ciskei. At the same time, South Africa began issuing stamps inscribed with the names of these areas.

South Africa has produced some great collectors stamps, including a stamp of a pair of lions in 1975. This was one of the stamps part of a four stamp series aimed at promoting tourism in South Africa and was selected as the most beautiful stamp in the world. South African stamps heavily feature wildlife and even modern stamps depict the flora and fauna found in the country, much like the stamps of Tanzania. Most of the most prized stamps from the region contain images that reflect South African culture.