In 1949, the Soviet Zone in Germany became known as the Deutsche Demokratische Republik, or DDR. This socialist state would remain in place until German unification occurred in 1990. It also included the Eastern portion of Berlin, which was occupied by the Allies as well. 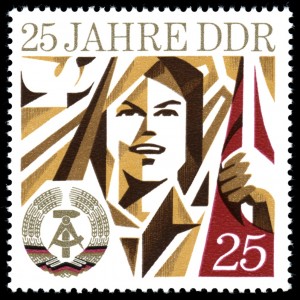 East German stamps remain highly collectible, just like German plebescite stamps and other stamps throughout the country’s extensive history. They were valid throughout the Soviet Zone, which included the areas bordered by Czechoslovakia, Poland, and the Baltic Sea.

Many of the common and rare East German stamps consisted of designs meant to promote the communist agenda. They were another aspect of the propaganda that was popular at that time. Multiple sets of stamps were issued by the DDR each year, and they even attempted to inflate values by printing limited quantities of certain denominations in each set.

The German Democratic Republic existed for 41 years; in that time, more than 3,400 postage stamps were issued. It was eventually overthrown via a popular uprising in 1989, which ultimately eliminated the Communist government. The last stamps to be issued by the DDR were released in 1990, in October, and commemorated the 41st Congress of the International Astronautics Federation, which took place in Dresden.

With the high volume of stamps from this era, many collectors need additional help in procuring the stamps they need to complete their collections. We encourage you to contact us at Treasure Coast Stamps; we are avid and passionate collectors ourselves, and can help you source the East German stamps you need for your collections.