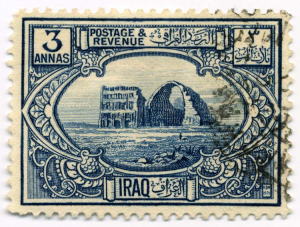 The first definitive stamp series was introduced in Iraq in 1923 once the British mandate initiated a postal service. The series of Iraqi stamps were a set of 12 featuring 8 different designs and imagery ranging from modern day to historical depictions. The first stamp with the face of a leader was a 1 rupee stamp, with an image of King Faisal I, released in 1927. This stamp was followed by a series of 13 values of stamps.

With Iraqi independence in 1932 came a new currency of dinars. The existing Iraqi stamps were surcharged and accordingly issued on April 1st, 1932. Many of the series of stamps that followed were sure to depict the images of leaders that followed King Faisal, including King Ghazi, Abdul Salam Arif and Saddam Hussain. Other stamps in the series often portrayed local scenes and the flora and fauna of the region. Some stamps in the series also had religious connotations, much like the stamps of Israel. 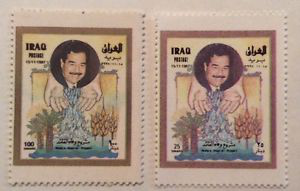 The first set of commemorative Iraqi stamps were released in 1949 to celebrate the Universal Postal Union’s 75th anniversary. Many of the stamps series focused on the leaders of the country. Saddam Hussain first appeared on a souvenir sheet of Iraqi stamps in 1976 and within a 10 year time frame, appeared on many Iraqi stamps. 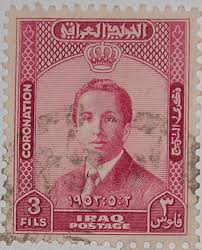