On May 7, 1945, the German forces unconditionally surrendered to the Allies, at the order of General Alfred Jodl, who signed the agreement at Reims. After that, it was up to the Allies to take over governance of the defeated German state, including handling the printing of postage so that letters could still be sent. 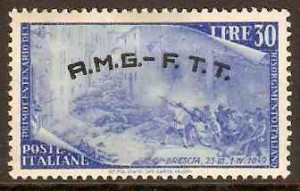 Collectors can find many examples of AMG Allied Military Government Stamps, and many American-British issue stamps, though some stand out as a particularly unique. In general, many collectors find these stamps very plain, and they often receive criticism for their drab appearance. That said, they are an important part of history, representing one of the biggest conflicts the world has ever seen. Here are a few in this genre to consider:

To learn more about these and other stamps of this timeframe, contact Treasure Coast Stamps. We are happy to assist you with all of your stamp collecting needs.