At the end of World War II, Germany was divided, and so began the Allied Occupation of Germany postage stamps. There were different stamps issued during this era according to the areas being occupied: 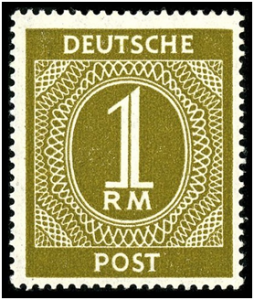 It should be noted that in early 1945, many towns attempted to create their own stamps for postage, creating charity stamps, as well as souvenir sheets, even though these activities were unauthorized under any government authority.